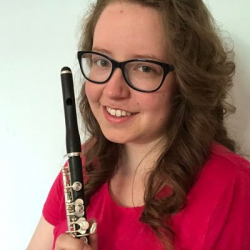 Despite both being in the concert flute family, flute and piccolo fingerings aren’t identical. If you want to play both instruments, you should know how the fingerings compare.

The Main Difference Between Piccolo and Flute Fingerings

The main differences between piccolo and flute fingerings are:

Consider some more details on the differences between the fingerings.

The lowest note that a piccolo can play is a written D4, which is just below the treble clef staff. While that was the case for the flute in the Baroque era, the flute’s range has grown.

Now, most flutes can go down to a written middle C (C4), which is a note below that low D. Some flutes, especially at the intermediate and professional levels, can reach a B below that (B3).

I’ve even seen a flute that can go to a low A, though that’s a very rare model. Most flute players have a flute with a C or B footjoint, and most piccolo players have a piccolo with a low D.

There are some piccolos with a low C or B, but that’s very uncommon. Also, those piccolos cost close to $10,000, so they aren’t exactly budget-friendly.

On the other end of the range, the flute tends to go a bit higher (on the page anyway). The piccolo can usually play up to a written C7, which is more than an octave above the staff.

You can play those really high notes on a piccolo. However, they typically require you to play a metal piccolo or a gold headjoint, and they aren’t the most practical pitches.

When you learn piccolo and flute fingerings, consider how both instruments transpose. The flute is a non-transposing instrument, which means that the note you see on the page is what you’ll hear when you play it.

However, the piccolo sounds an octave higher than written. The note name will be the same, so you don’t have to worry about that, but it’s still important.

That means the first octave of the piccolo sounds like the second octave on the flute. Keep that in mind when practicing or even writing music for both instruments.

The Use of Alternate Fingerings

If you have a C# trill key on your flute, you can use that key to stabilize the note. However, with the exception of really expensive models, most piccolos don’t have that key, so you have to use your right hand to close holes to help the pitch.

The top octave of the piccolo tends to require even more alternate fingerings. If you don’t have a high G# facilitator, you may need to use your right hand to help adjust the pitch of the third-octave G#.

Those fingerings aren’t as necessary when you’re playing the standard C flute. You may have more specs to help, or the pitch just isn’t as unsteady.

The Ability to Produce New Pitches

If you play a lot of contemporary music, you may have come across microtones. These are tones that fall between the standard 12 notes of the western scale, like between C and C#.

Many flutes have open-hole keys that make microtones easy to play. On the piccolo, you can play those notes, and I have done so in pieces like Death Whistle by Nicole Chamberlain.

However, you have to use different fingerings because most modern piccolos have closed holes. There are some vintage piccolos with open holes, but those are hard to find and may be expensive.

Most Piccolo and Flute Fingerings Are the Same

Keep in mind that while there are differences, most fingerings are the same on the piccolo and flute. You can look at the mechanism of each and see that the keys look very similar.

That’s because the flute inspired the design of the piccolo, and they’re part of the same family of instruments. Just like how you can use the same fingerings on all saxophones, the same is true for all types of flutes.

If you want to learn the fingerings for both instruments efficiently, here are some of my best tips.

You may be able to learn the piccolo first, but it will be very difficult. The flute is more forgiving and uses a larger embouchure, so it’s a better option for beginners.

When you start learning the flute, you’ll learn fingerings for a few notes. Most beginners learn the B, A, and G in the staff during their first lesson or two.

Be sure to practice the flute consistently, and slowly learn more of the notes on the instrument. After you’re comfortable playing the entire range, you can add the piccolo into your practice routine.

Switch Back and Forth

I use a Hercules Flute Stand so that I have a safe place to rest each instrument when I’m not playing it. This is a great option if you may need to play a piece that requires you to use both instruments.

Treat Each Instrument as Its Own

While the flute and piccolo have a lot of similarities, there are just as many differences. Try not to think of the piccolo as “just a small flute.”

When you play it, try to become a piccolo player. If you’re just starting the instrument, treat yourself as a beginner, and go through your beginner flute books to learn the piccolo.

I’ve found that thinking of each instrument as its own helps a lot. That way, I don’t use the flute embouchure on the piccolo or vice versa, and I do that with fingerings, especially alternate fingerings.

I could try and explain the different fingerings for the flute and piccolo. However, that’s very difficult with all of the keys on both instruments.

However, you may prefer to use books, in which case, here are some of my favorites.

If you need to learn some more advanced flute fingerings, Trevor Wye Practice Book for the Flute Volume 6 is great. It covers fingerings for the third and fourth octaves as well as some trill fingerings.

You will get this volume included if you buy the new version of the Omnibus Edition. However, I bought the old edition, which separated volume 6 from the first five books.

Jan Gippo’s The Complete Piccolo is a great resource for piccolo players. It contains a long list of piccolo fingerings that spans almost 20 pages.

I’ve used this book on and off since I was in college, and I still reference it. Not only can you find fingerings, but you can learn about piccolo history and repertoire.

For flute and piccolo, 1 usually corresponds to the index finger, 2 to the middle finger, 3 to the ring finger, and 4 to the pinky. Most charts use the letter T to represent the left thumb.

Different charts use various symbols to represent the pinky keys and trill keys. Some may use small lines, while others use the letters that correspond to the note names.

I’ve also seen some charts that act as a table with the key or note name on the side. They’ll mark the keys you have to press for each note, and this is how the Rubank chart works.

Question: Why do the piccolo and flute have different fingerings?

Question: Is the piccolo or flute easier?

Answer: It may seem like the piccolo is easier because there are fewer notes. However, the flute is much easier, especially if you’re new to both instruments.
But if you know how to start learning the piccolo, you may find it’s easier than you think. Also, your interest in both instruments comes into play because you’ll get better at an instrument that you want to play, which can make it seem easy.

Question: Why does the piccolo have so many alternate fingerings?

However, their differences can have a huge impact on your playing. Be sure you understand when to use different fingerings as you switch between the flute and piccolo so that you can sound good on each instrument.

For more interesting readings check out: