When my friends and I transitioned from middle school to high school, some of the band members got an invitation to join the marching band. One of my friends was over the moon; that was all she wanted.

The director handed her a mellophone when she showed up at band camp. She didn’t even know what it was, she had never seen one before, and she felt like she had been duped when she agreed to join the marching band, under the impression that she would be playing with a different instrument.

I have a feeling she’s not the only one who encountered this odd instrument at that pivotal moment in adolescence.

I am smitten with the Tempest Mellophone. The Tempest is more ergonomically friendly, and you have better weight distribution, but they don’t tell you exactly how much it weighs. You also have more options when it comes to the material and the finish used on your mellophone out of all the mellophones on this list.

What is the Mellophone? 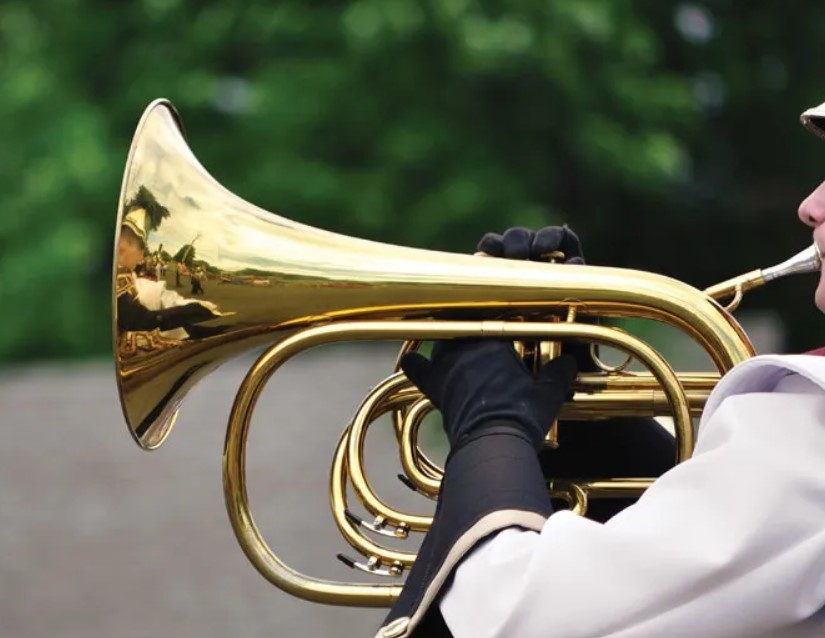 The mellophone is a horn, part of the brass family. It looks like a cornet and a French horn had a baby. The mellophone is not very well known around the world, but in America, it is easily recognizable by anyone who takes up the marching band.

It has an oversized (I would argue, absurdly) bell. Anyone who has seen a mellophone knows the bell flares wide enough to cover a large human head. The bell is disproportionately large compared to the rest of the components. Because of this, you get some projection characteristics and tuning issues that might catch you off guard at first.

When Do You Play the Mellophone?

The name “Mellophone” comes from the actual tone produced: something mellow. In this video, you can hear someone playing the John Packer Mellophone:

The mellophone was designed to replace a French horn in a marching band. It gives the French horn sound but in a different configuration. The French horn plays down to the side, projecting behind you. The mellophone, by comparison, projects forward and is played the same as a trumpet.

Tip: The easiest way to get accustomed to a new mellophone is to practice the same scales you use for a French horn–except for a few of the lower notes.

The mellophone has the same pitch as an alto horn. You can find: 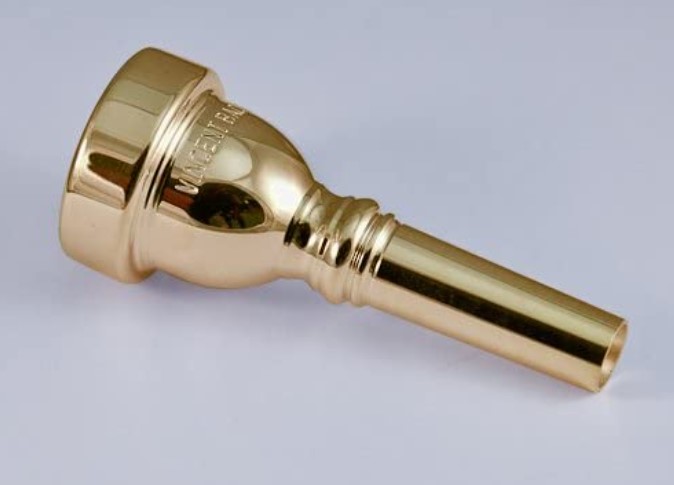 Why? The angle. When you play the French horn, it is played down; the mellophone is played straight ahead.

So, the angle for the French horn is different from the angle used to play the mellophone, and the wrong mouthpiece inhibits your embouchure. It is much more disruptive to your skills to try and change your embouchure so that your mouth compensates for that different angle depending on the instrument you are using.

A mellophone-specific mouthpiece also gives you more cushion around your lips and better projection. The cup is much deeper, akin to a horn mouthpiece, so it provides a nicer, mellow sound.

Tip: Use a 50/50 embouchure just like a trumpet player.

The pinky hook should be on top of or at level with the valves, but the lead pipe often twists immediately down after the valve casing, so on some models of the mellophone, it is not going to be a good fit. With some models, the position of the pinky hook where you play can be too low, interfering with the correct hand position for playing the valves. This was one of the main selection criteria used in addition to the affordability, materials used, and style.

How to Find the Best Mellophone

Now that you have the information on what it is, when to play it, and what mouthpiece to use, let’s look at some of my top recommendations: 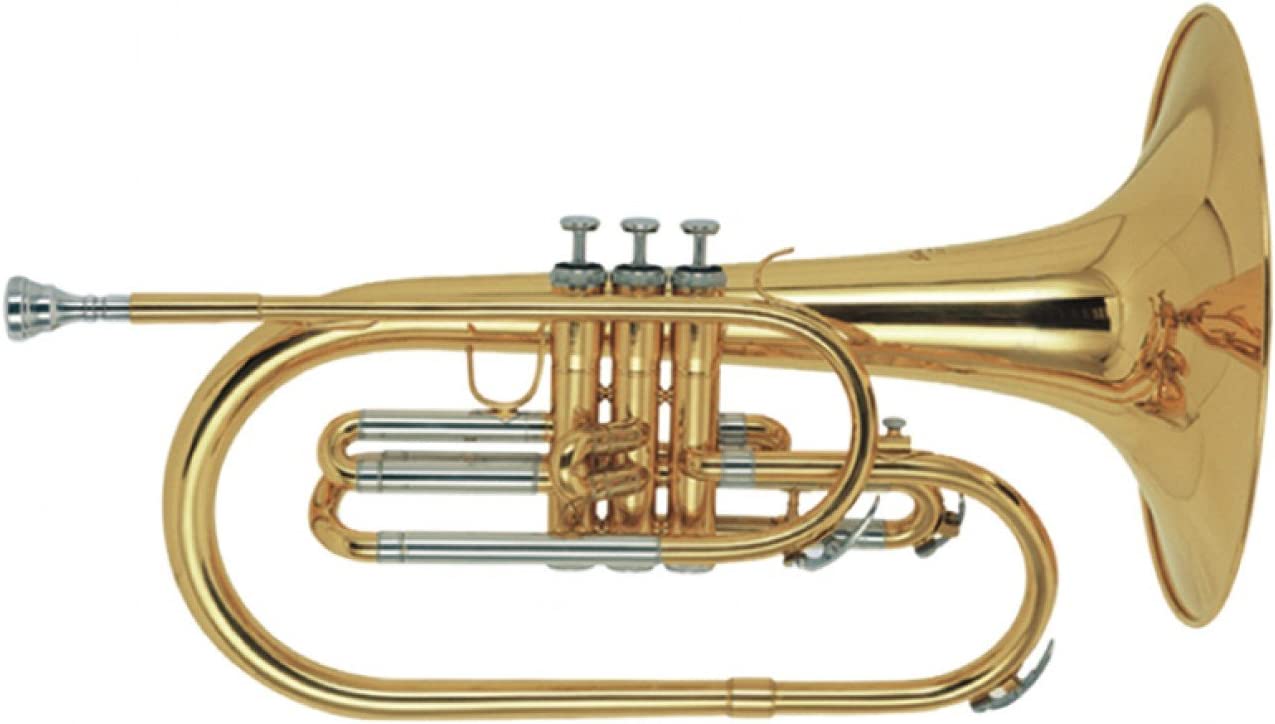 However, as is often the case, there was a reason it is much cheaper. It weighs less because the quality of the materials is not as good as the other models I reviewed. If you are on a very tight budget, just be prepared to have to do a lot of Maintenance and breathe a little bit harder to get the same sound.

The sound might not be as good a quality as the other models, but I can fully appreciate situations where you legitimately can’t afford more expensive models, and this will get you by in those cases. And speaking of cases, it doesn’t have one, so be prepared to shell out some extra money for a mellophone case.

The Tempest Mellophone is a silver-plated, nickel instrument that comes with a five-year warranty, a hard case, and two mouthpieces. Of course, one of those mouthpieces is for the French horn with an adapter (see my previous note on this), so I recommend you just throw that out.

Now, if you buy it from Amazon or similar online vendors, you only get the silver-plated nickel design. If you go directly to their website, you can find it in silver or a yellow brass lacquered finish.

This model offers a beautiful sound. I was impressed. The ergonomic features on it also make it one of the more comfortable to hold. This model has a more evenly placed weight even though it has an oversized bell. This makes it a slightly better investment than the Yamaha model, which is only 3 pounds but known for being heavier at the bell end. 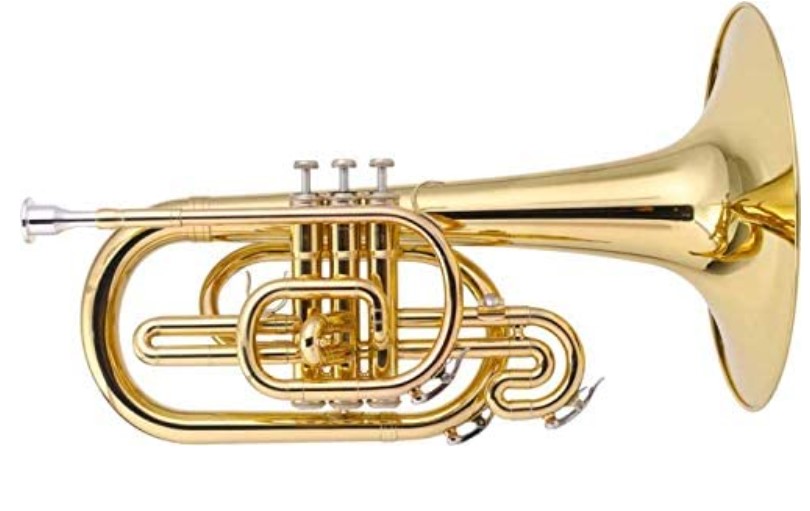 The John Packer JP2051 Mellophone is an inexpensive model available in brass or the (more expensive) silver plating. It is actually one of the more affordable options for a Mellophone, coming in at just over $1,000 compared to the other models on this list which cost twice that.

Both models play perfectly in the middle register with a rich, mellow sound. They are designed to fit smaller hands for high school-aged and college-aged students.

The lacquered brass and silver plated finish have forward-facing bells perfect for a jazz band or high school and college band. You get a hard plastic case, tuning slide grease, valve oil, and a mellophone-specific mouthpiece, so you won’t have to worry about cut lips and scabs when you start school. 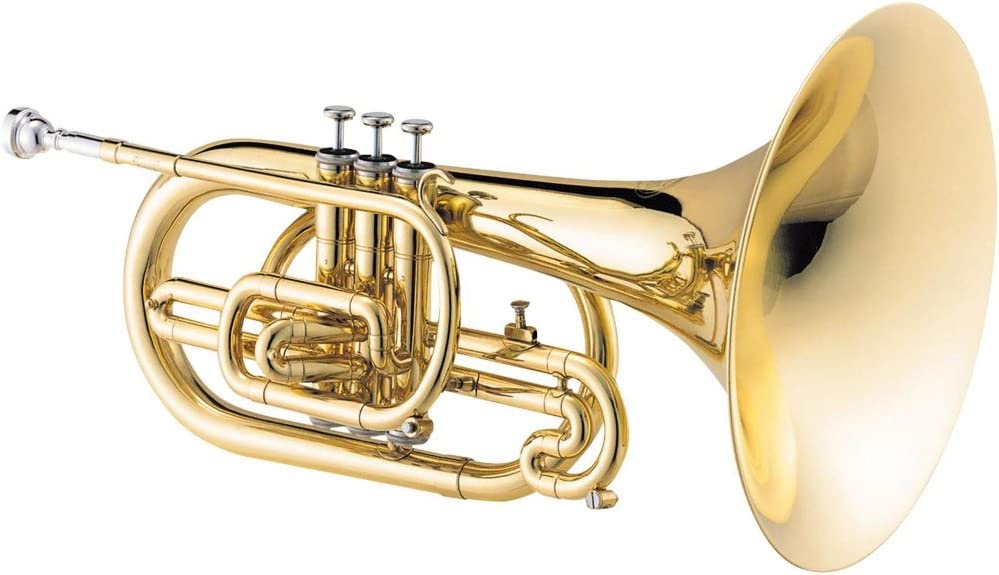 The Jupiter Marching Mellophone gets its name because it is meant for marching band. This one weighs about 15 pounds. It is a step up in terms of cost compared to the John Packer, and it is only available with a brass finish.

This model has stainless steel pistons that move smoothly. You’ll be able to test your agility thanks to this feature. This model is also in the key of F and has a French style. You get a molded plastic case which is a small step up on the John Packer model because it is molded to fit the instrument, but otherwise, it is the same level of protection and lightweight design.

The Jupiter model comes with a Mellophone mouthpiece and that French horn mouthpiece with an adapter if you decide you want to make your marching band season particularly uncomfortable. 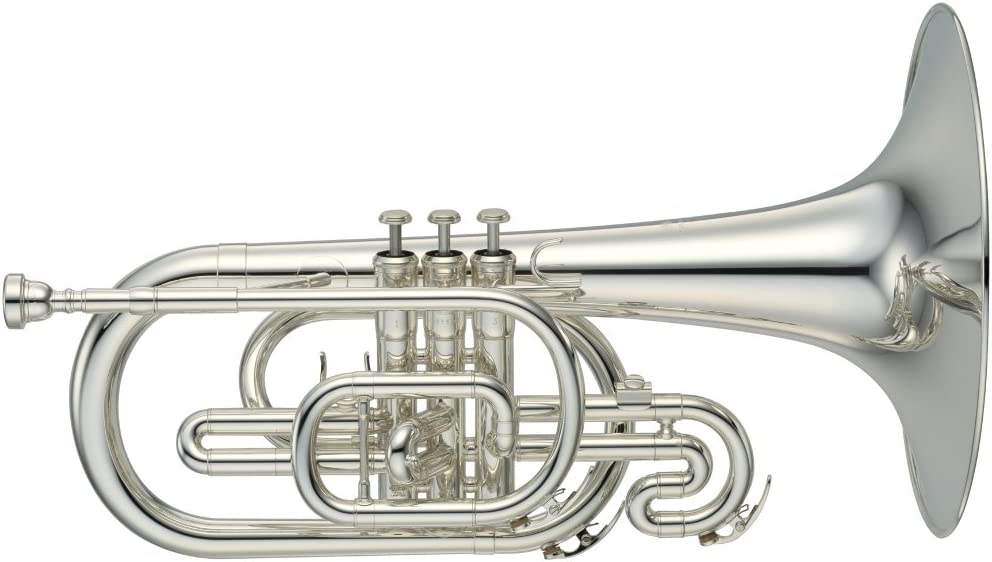 I really like Yamaha when it comes to brass instruments and keyboards. Yamaha makes a silver plated, and gold plated marching mellophone. Their marching mellophone is more expensive than most of the other models, costing over $2,000, but they’re also very popular for the warranties they provide, the customer service, the quality of materials, and the durability. So, while you might be paying slightly more, you get more out of your investment.

Also? Let’s look at the weight. The Jupiter marching mellophone weighs 15 pounds. Even the cheaper student model weighs 5 pounds, but the Yamaha weighs only 3 pounds. This is much easier to support with your upper body as you’re marching across a field compared to something that weighs 15 pounds.

The downside? A mellophone has a massive bell, and the Yamaha mellophone is no exception, so most of your weight is going to sit in that bell, making the instrument a little unbalanced while you play. So I guess you don’t get out of the physical demands just because it weighs less.

Question: What note do mellophones tune to?

Answer: The mellophone uses three valves, the same as many other brass instruments in the key of Eb or F.

Question: Is mellophone easier than trumpet?

Answer: Most people would argue it is easier. They are very similar, but it is easier to sustain the right tonal quality with a Mellophone compared to a trumpet. However, they both work the same way, so you can transition back and forth between the two instruments and figure out which one you like best.

Question: How heavy is the mellophone?

Answer: This depends on the manufacturer. Student grade mellophones might weigh between 3 pounds and 5 pounds, but slightly more intermediate models meant for high school and college band can weigh up to 15 pounds.

Question: What is the difference between the French horn and the mellophone?

Question: How many mellophones are in a marching band?

Answer: This depends on the size of the marching band. For example: if the marching band has 28 Alto saxophones and 40 1000 trombones, you can expect to have about 40 mellophones as well, but this is something you should talk to individual band directors about at the school you are considering.

John Packer and Yamaha are both great models, especially for students, but the Tempest is my favorite because of its ergonomically-friendly design and better weight distribution. All other things considered, it gives you the same mouthpiece and case you would get with other models, but it’s easier to hold for longer periods.