The mellophone is a brass instrument that, at first glance, looks like a big trumpet but which is used to play horn parts when marching. The mellophones play in the mid-voice section alongside saxophones and trombones and frequently play countermelodies. But the mellophone of today looks very different from similar instruments that have been called “mellophones” in the past.

History of the Mellophone

In 1855 instrument maker Antoine Courtois introduced a “Koenig Horn” (also called a “Melody Horn”) that looked like a posthorn but had three piston valves that allowed the hornist to play a complete chromatic scale. The Koenig Horn came with B♭ and C crooks. The B♭ crook was used when playing in brass bands, while the C crook let the musician play along with piano or organ music.

(You may note that the Koenig horn looks similar to what we call a “French horn.”  But our “French horn” actually originated in Germany! The valved horns made in France used piston valves like the ones we see today on trumpets. In Germany and Eastern Europe, rotary valves were more popular. The German-style horns became most popular, but for reasons that remain unclear, were called “French horns” in the English-speaking world.)

Several instrument makers created their versions of the Koenig horn. In England, instrument makers Köhler & Son sold theirs as a “mellophone.” This mellophone became very popular with amateur hornists because it was pitched in F alto, a full octave above a standard orchestra horn, making higher passages much easier to play. Although the modern mellophone is no longer circular, it retains the classic mellophone F alto pitch, and its tubing is still half the length of a standard concert horn. 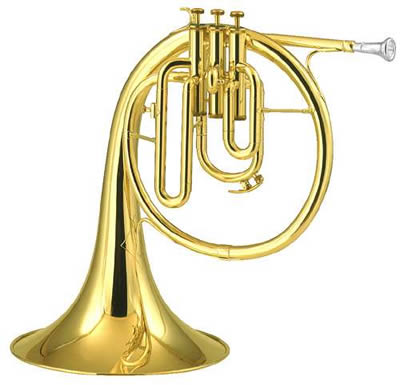 In the spring of 1957, Conn Instruments introduced a new marching substitute for French horns, the 16E Mellophonium. The mellophonium had a forward-facing bell that made it better suited to the needs of a marching band. But Conn had higher hopes for their instrument and hired “Conn Artists” to play the mellophonium on television and in recording studios.

But while Kenton felt the mellophoniums filled an important sonic space between the trumpets and trombones, most musicians hated the instrument. It was difficult to slot notes, with many valve combinations producing flat notes. Several Kenton players quit rather than play mellophonium, and those who stayed longed for the day they could play trumpet instead. In 1964 Kenton retired the mellophonium to great rejoicing among his brass players.

While Conn stopped making the 16E in 1979, used 16Es are often available on the vintage instrument market for very reasonable prices. Unfortunately, many do not come with the original mouthpieces. Luckily, there are options for those musicians who want to try their hand at the mellophonium.

Legends Brass created the Legends “Scodwell Mello” mouthpiece specifically for the 16E. Designed with the aid of Tony Scodwell, one of Kenton’s mellophonium players, the Scodwell Mello is based on a custom mellophonium cup made for Scodwell in 1963. The Scodwell Mello has a horn cup and a semi-round rim, with an enhanced throat and backbore that will make it easier to get sweet sounds out of this beautiful but challenging beast.

While the mellophonium and concert mellophone have fallen into obscurity, mellophones are a fixture on the marching field, where they fill in the role played by the French horn. But the marching mellophone is a comparative newcomer, with a surprisingly brief history for such a commonly played instrument. 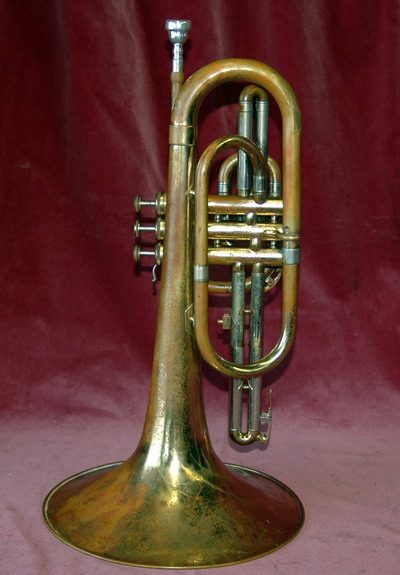 The mellophonium’s front-facing bell was popular with marching bands, but players complained of the same design and intonation issues that plagued  Stan Kenton’s musicians. In 1970 Reynolds introduced its ML-13 Marching Mellophone as a replacement for the ML-12, a horn whose design was very similar to the Conn 16E. In its 1977 catalog, the company proclaimed

The compact design and lightweight construction of the Reynolds Marching Mellophone offers superior playing ease and comfort in the most intricate maneuvers. In addition to the improved intonation, the ML-13 responds instantly while retaining richness and balanced clarity of tone throughout the scale.

The ML-13 was also more compact than the mellophonium, whose bell extended nearly two feet from the musician’s ear. (To put this in perspective, a trombone’s bell is less than a foot away from the player’s ear). This tighter wrapping makes it easier for players to hear themselves. And the larger, deeper mouthpiece gave it a dark, round tone and made it easier for players to hit and sustain notes.

Reynolds, like many American instrument makers, is now out of business. But their front-facing horn lives on, as several companies still make mellophones for marching bands. Here are some of the best mellophones being made today. 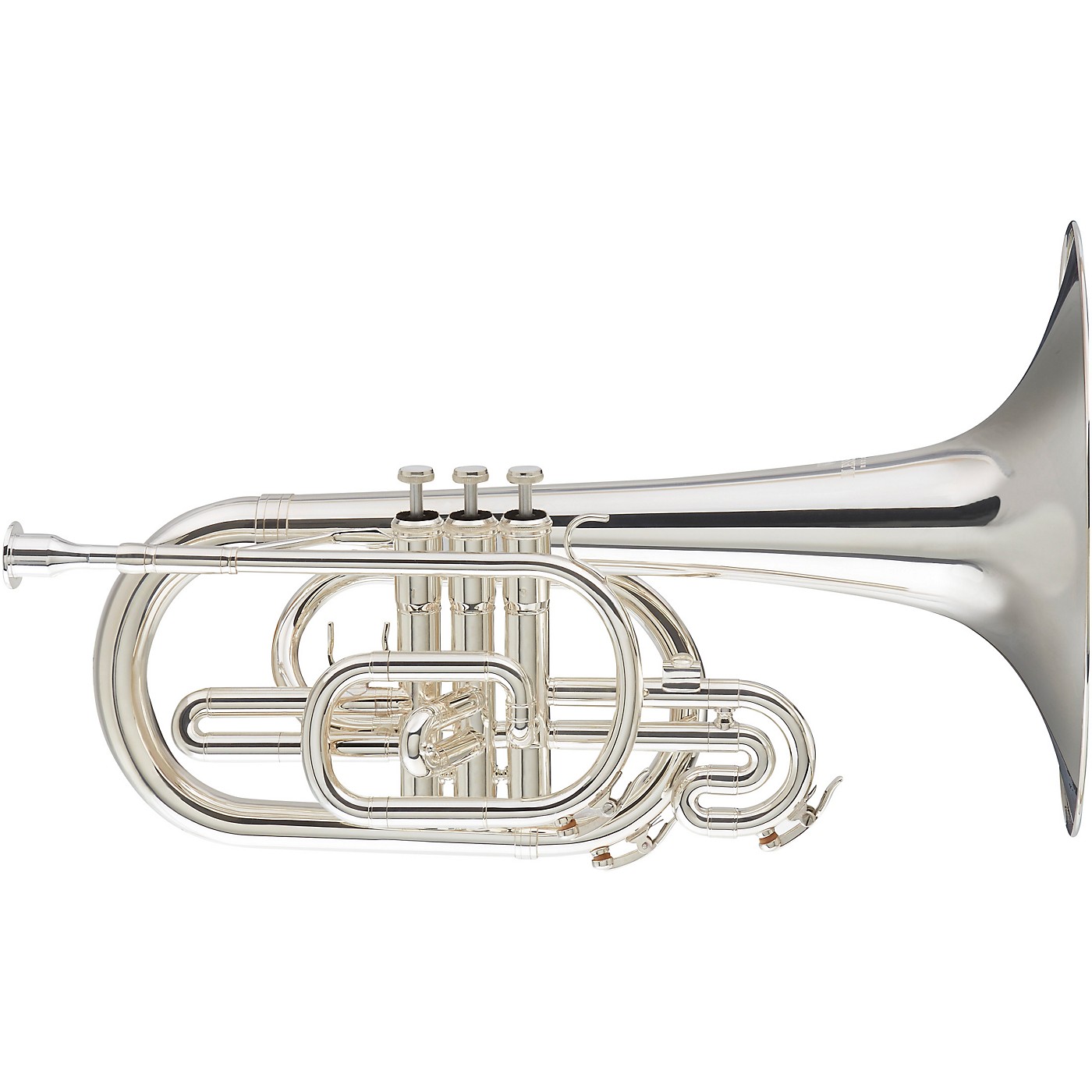 Blessing has been making student instruments for over 100 years, and their BM-111 Mellophone is designed with student band members in mind. Its compact wrap and lighter weight make maneuvers easier for young players, but the BM-111 is sturdy enough to withstand the rigors of travel and practice.

The BM-111 comes with a hard plastic case that will protect your instrument during away games and comes with a gold or silver lacquer finish. At around $1,100, the BM-111 is not the cheapest mellophone available. But Blessing’s long history and sterling reputation give you the confidence you won’t get when buying a budget mellophone from an anonymous reseller. 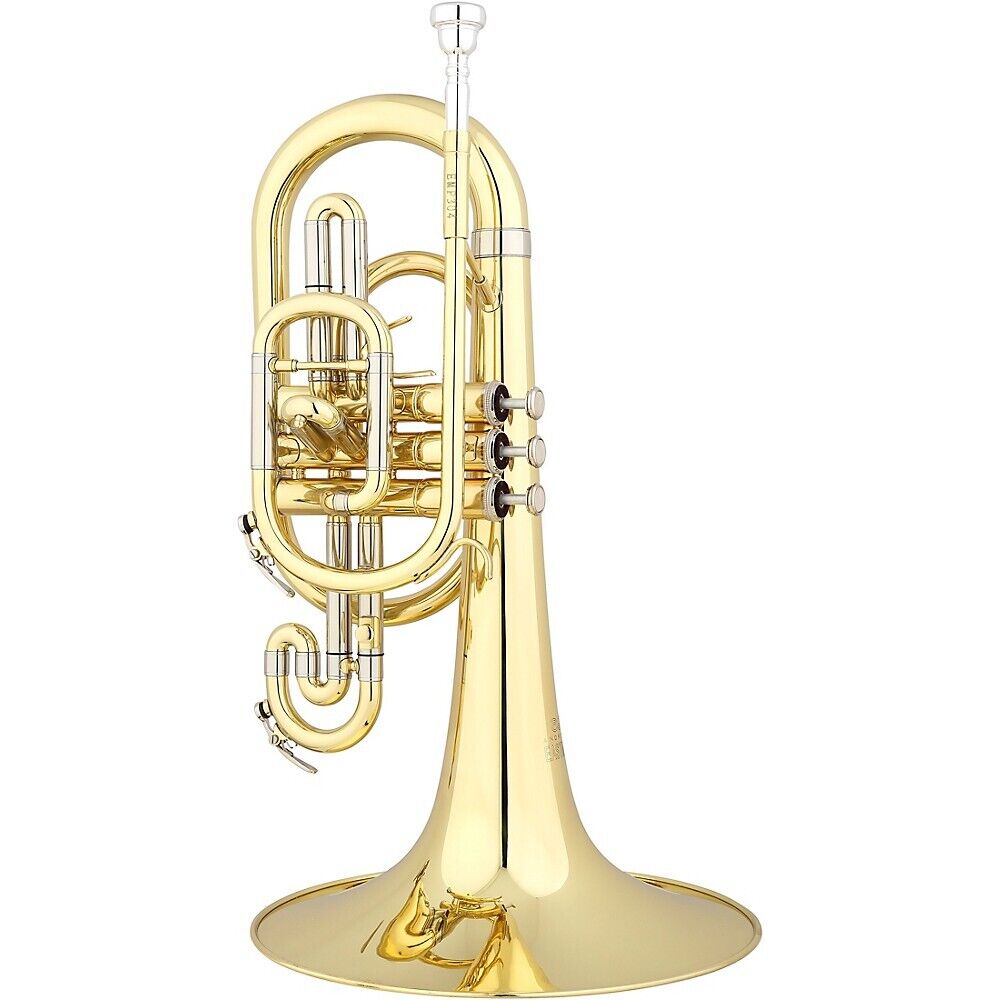 In 1992 Quan Yi founded Eastman Strings. Today Eastman continues to make world-class violins and cellos, but they have also begun producing other instruments. Their EMP304, like other Eastman instruments, is made by trained craftsmen and not simply mass-produced.

While earlier Eastman brass had quality control issues, their latest marching brass is uniformly excellent, especially since they became affiliated with the legendary British brass company Shires. The EMP304 runs about $1,200 for its gold brass model and nearly $1,500 for the silver plated. It comes with a protective case and mouthpiece. 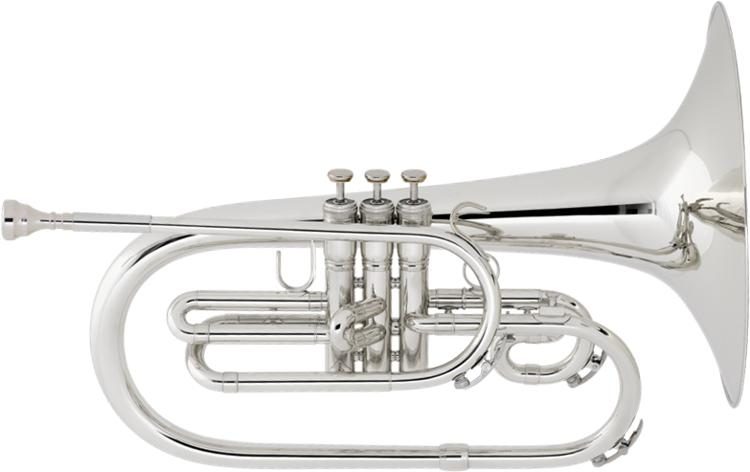 King is a legendary name among brass musicians, and the King 1211 may be the best mellophone you can buy. Its wider .468″ bore (most mellophones are made with a .462″ bore) gives it extra power that will make you stand out on the field no matter how loudly everyone else is playing. Its nickel-plated valves have smooth, fast action that will carry you through the most difficult passages.

Alas, the King 1211 costs over $2,000 and is the most expensive mellophone on this list. If your band director gets a good discount or if your school has a generous benefactor, you may be playing a King mellophone. For most bands, the King will likely be outside their budget range. 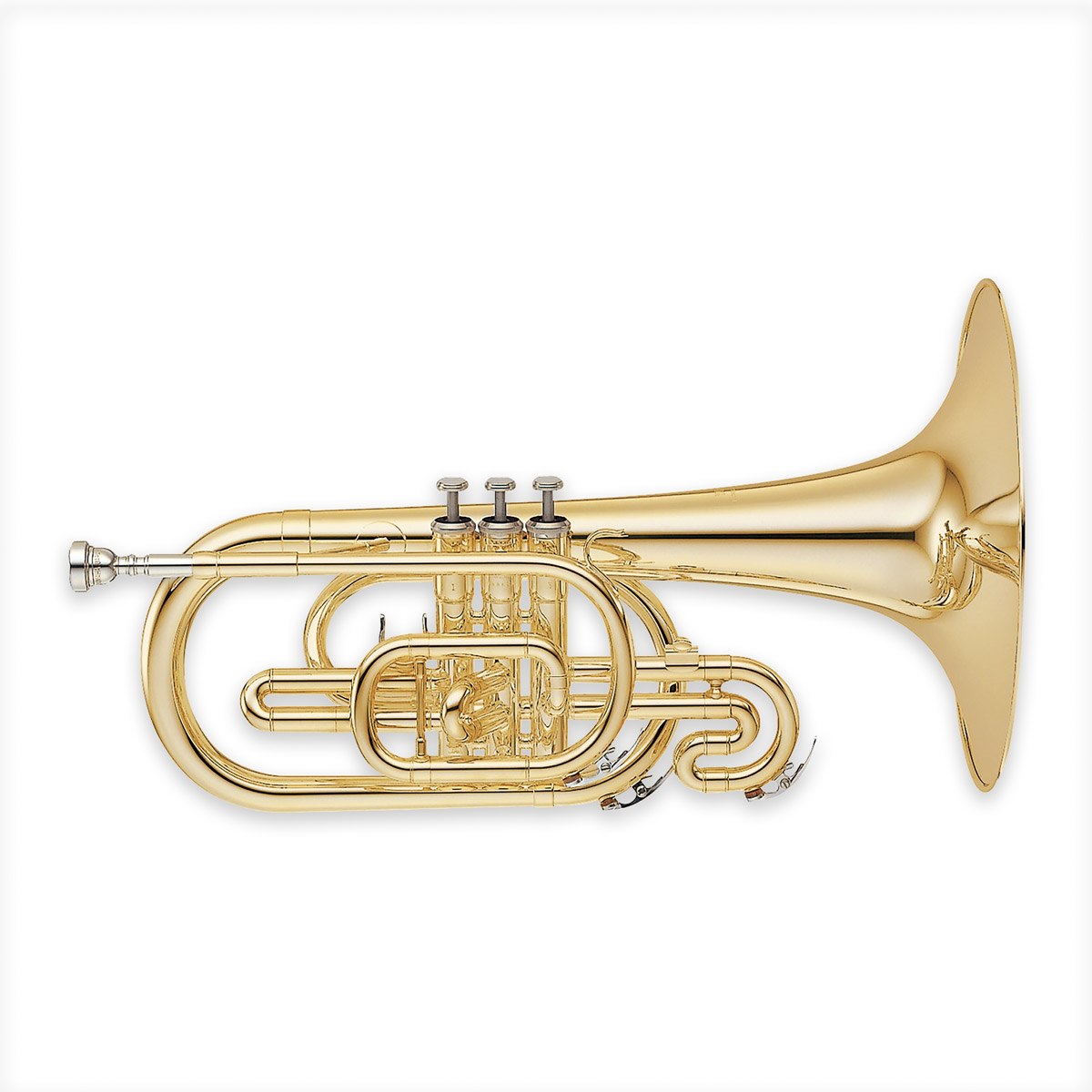 When you are in a marching band, you want a unified sound. Yamaha is noted for its consistency and its rigorous quality control. If the mellophone section is using the Yamaha YMP-204, the director knows that every horn will have proper intonation, proper soldering joins, and perfectly machined valves.

Yamaha also has a great research and development department. The YMP-204M uses redesigned bracing and tubing that provides better balance, greater durability, and a more free-blowing feel. And the YMP-204M is available in gold or silver to match your band’s color preferences. The only problem with the YMP-204M is its $1,800 price tag, which is in the high range of mellophone prices.

While a few individuals own their own mellophones, most use the horns provided by their band director. Given the limited call for a mellophone off a marching field, you may want to spend your money on a very similar but far more popular instrument.

While jazz musicians disliked the mellophonium’s slotting issues, they loved its resonant horn-like sound. The flugelhorn, a valved horn designed in the 19th century by Adolphe Sax (the saxophone guy), has a conical bore like the mellophonium and offers a similar velvety tone with fewer playing difficulties. Jazz trumpeters like Clark Terry, Freddie Hubbard, and Miles Davis have recorded and played with a flugelhorn. Chuck Mangione, famous for “Feels So Good,” uses a flugelhorn exclusively.

The flugelhorn is in B♭ like a trumpet, not F like a mellophone. , But it is frequently used by marching bands in Britain and Europe.  . 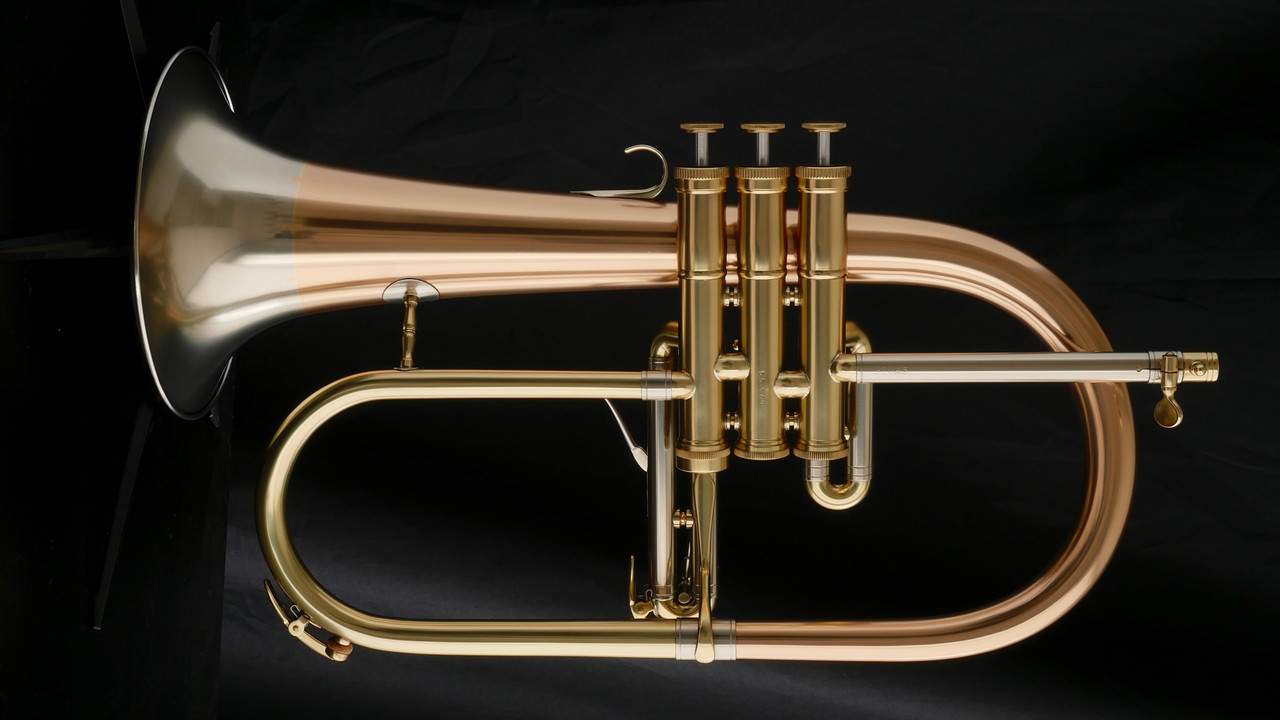 Adams Music, a Dutch instrument company, makes the world’s most popular flugelhorn, the F1. But you can also choose between four other models, including a four-valve horn that can help with the lower and pedal ranges. If you favor a warmer and more French horn-like tone in your playing, the flugelhorn will help you achieve that sound. An Adams flugelhorn will set you back between $3000 and $3500, but it is money well spent on an instrument from the world’s leading flugelhorn experts.

Question: Is a mellophone the same as a French horn?

Question: Does a mellophone have a trigger?

Answer: While a double horn has a trigger that allows you to switch between F and B♭ (a fifth higher), the mellophone is a single horn that has no trigger. The mellophone is in F alto, a full octave higher than the French horn in F.  This is the same pitch as the F alto in a double descant or triple French horn.
Some vintage concert mellophones have an E♭ trigger that allows you to go a full tone lower and which can be helpful with intonation issues. And the mellophonium used an E♭ crook for the same purpose.

Question: What is the difference between a mellophone and a trumpet?

The mellophone is a specialized instrument designed for marching bands. Almost all marching bands are affiliated with schools, colleges, or the military, and there is almost no demand for mellophones off the marching field. Most professional or serious amateur musicians will find they have little use for a mellophone. A serious symphonic musician will get more use out of a concert French horn, while aspiring jazz artists will get more work playing a flugelhorn.

If you own a Conn 16E mellophonium and can master its quirks, you will find many fans among Stan Kenton devotees and lovers of mid-20th century jazz.

Whatever your interest in mellophones or music, happy playing!