Euphoniums and baritone horns are popular in marching and brass bands but not often used in other genres. Although they are different instruments with different intended purposes, many composers and band leaders treat baritone horns and euphoniums as interchangeable. Given that they look very similar and have the same range (on paper, at least), it is not hard to understand the confusion. But it is, nonetheless, confusion, as baritones and euphoniums have different histories and serve different musical purposes.

While I am passingly incompetent on clarinet, the only thing I can play on a euphonium or baritone horn is a stirring rendition of John Cage’s 4’33”. (People often request I play it on clarinet as well). But I’ve got a decent ear for music and an endless fascination with obscure instruments that deserve more attention. I am here to show you the differences that even many brass composers and band directors miss.

Bottom line up front: The euphonium offers a player more chances for solo work and has a stronger lower end, while the baritone horn’s brighter sound blends well in ensembles and on harmonies.

At a quick glance, it can be tough to distinguish between a euphonium and a baritone horn. But there are a few significant differences to keep in mind.

Curious? Read on and learn more!

History of Baritone Horns and Euphoniums

Though they look like fraternal twins, the baritone horn and euphonium have different ancestors. The baritone horn is a member of the saxhorn family. Adolphe Sax also created a family of saxhorns that used a brass mouthpiece instead of single reeds like his more famous saxophones.

Introduced in 1844, saxhorns were built in several different keys and pitches and intended to provide a homogenous sound when played together in an ensemble. Today’s baritone horn is very similar to Sax’s baritone saxhorn.

Some writers consider the euphonium to be the direct descendent of the bass saxhorn, and bass saxhorns are often used for euphonium parts by French brass bands. But the euphonium is actually derived from the euphonion, a tenor instrument introduced by Sommer of Weimar in 1843.

Sommer, for his part, was inspired by tenor version of the basstuba (a forerunner of the modern tuba) introduced in 1835 by Johann Moritz. So the euphonium is actually more closely related to tubas than saxhorns.

Euphonium and Baritone Horn: Breaking Down the Differences

Every note you hear on a brass instrument starts with the musician blowing a raspberry into a shallow metal cup. The mouthpiece then sends those vibrations through the instrument, amplified and sent out to the audience. Using their lips and breath (embouchure), the brass musician can play a harmonic series of notes.

Their mouthpieces come in a standard configuration for beginning to intermediate players and a deeper Ultra configuration for professionals, giving them more control in the high register. Denis Wick also offers a classic euphonium mouthpiece for those playing vintage instruments.

The euphonium and baritone horn have 9 feet of conical tubing, making them B♭ instruments like a tenor trombone. But the baritone horn has a noticeably weaker lower end than a euphonium. This is due largely to tubing differences.

Conical tubing becomes wider as it goes along, while cylindrical tubing, like that used on a trumpet or trombone, stays the same until it joins with the bell. But the conical tapering on a baritone horn is more gradual and subtle than that used on a euphonium. This gives it a brighter, sharper sound than the more widely tapered euphonium.

Not only is the tubing less flared on a baritone, but it is also more narrow. A chart by euphonist David Werden shows that the internal tubing diameter different baritone horns range between 0.488″ and 0.522″. Euphoniums, by contrast, range between 0.559″ and 0.592″. You might not think 7/100 of an inch would make a big difference, but it does. The euphonium’s wider bore gives it more power on the lowest fundamental note and makes it easier to play.

If you’re looking for an inexpensive starter baritone horn, the Stagg WS-BH235 Baritone Horn is an excellent choice. Stagg has gained a name for itself for offering solid student instruments at an inexpensive price. The WS-BH235 comes with an ABS case and is an excellent choice for the beginning baritone horn player. Its .522″ bore is large for a baritone and will give you more low-end oomph, while its light weight makes it a good choice for younger players.

For not much more than you’ll pay for a cheap three-valve student euphonium, Stagg offers the L451 4-valve Euphonium. The extra valve may take some getting used to if you’re coming from a three-valve trumpet, and the broad .570″ bore will require a bit more wind for good sound.

Since this is a non-compensating 4-valve, you’re going to have to master your embouchure to keep certain key combos in tune. But once you master it, you have an instrument that will be great for beginning and intermediate euphonium players.

Each horn has a harmonic series that depends on the length of its tubing. But a valveless horn cannot play a full chromatic scale (each white and black key in a piano octave). Euphoniums and baritone horns use valves that open additional lengths of tubing.

This changes the harmonic series and allows the musician to play any note within the instrument’s range. Most brass instruments use valves, though trombones use a slide for the same purpose.

With brass valve instruments, the first valve lowers the pitch a whole step, the second a semitone, and the third three semitones. But when you play them in combination, the ratios are not exact, so the pitch grows increasingly sharp.

To compensate for this, many euphoniums and nearly all professional euphoniums use a fourth compensating valve on the left side of their instrument. When pressed, the fourth valve opens extra tubing off of the back of the three upright valves and provides proper intonation in the lower range of the instrument. (Four-valve non-compensating euphoniums like the Stagg L451 give you extra low-end and alternate fingerings but do not correct for intonation issues).

While three-valve euphoniums are almost exclusively student instruments, the majority of baritone horns at all levels are made with three valves. Four-valve baritone horns are available, but they are the exception rather than the rule. Baritone hornists typically compensate for intonation issues using their embouchure to correct the note.

At $1,895, the Wessex Dolce B♭ Compensated Euphonium costs nearly twice as much as the Stagg non-compensating four-valve euphonium. But that’s still 1/3 the price you’ll pay for most compensating euphoniums.

While it costs less, the Dolce still gets rave reviews from euphonium players who praise its velvety tone and easy playing action. While Chinese instruments get a bad rap in many quarters, Wessex wins accolades from amateur and professional musicians for its quality control and reasonable prices.

Double-bell euphoniums are rarely seen today, but they were common in the mid-20th century. The Wessex Duplex B♭ Euphonium brings this old marching band favorite back for modern euphonium players. The second bell is activated by a fifth valve.

Because it is smaller, it produces a brighter, more focused sound, more similar to a baritone horn. (In mid-century bands, double-bell euphonium players switched to the small bell to play trombone parts). The Duplex’s second bell is removable, so you can take it off and play it like a standard euphonium. 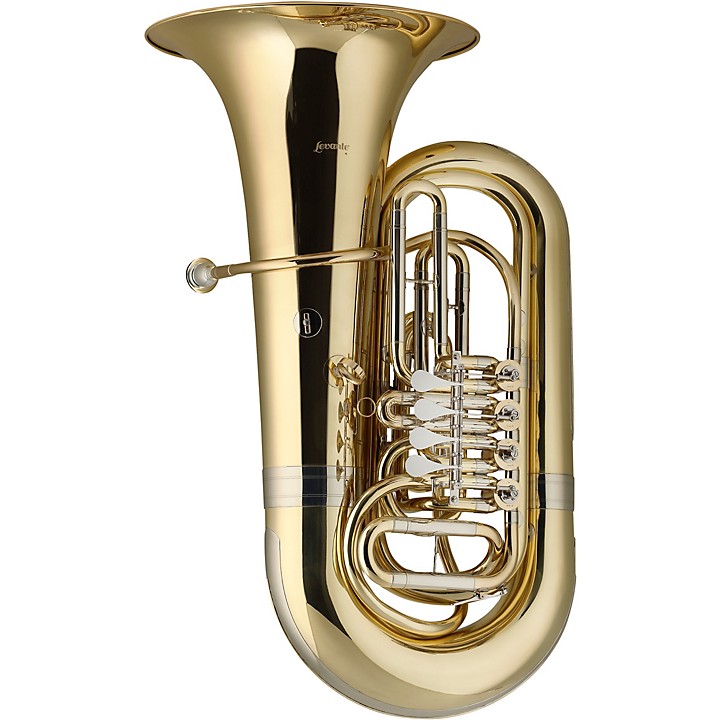 If you want deep bass, you can’t get deeper than a tuba. In Encounters II, a piece written especially for him, Roger Bobo plays a C0, a full octave lower than the lowest C on the piano. And while many people think of the tuba as a funny “oom-pah” machine, in the hands of a skilled player, a tuba can make sweet music with a nimbleness that belies its enormous size.

The good news is that thanks to the work of many great tuba players, the tuba is making a comeback in jazz and is always popular with soundtrack composers and symphony conductors. The bad news is that tubas are heavy, massive, expensive, and require a lot of lung power. Very young musicians will likely find it easier to play a euphonium or baritone horn.

There’s no easy way around it: tubas cost thousands of dollars. But for less than the price of many student tubas, the Levante LV-BT5705 BB♭ 4-valve Tuba offers many features usually found on much more expensive instruments.

Its four rotary valves are great for symphonic works, and its 17 1/2-inch bell gives you plenty of resonance for the deepest notes but is still nimble enough to handle fast passages. $3,000 is a lot of money, but you get a great instrument for your investment.

For several reasons, the trumpet is the most popular choice for a first brass instrument. Trumpets are small and easily carried, something you can’t say about baritone horns or euphoniums. Trumpets are wildly popular in every genre, from classical to jazz to rock, and the trumpet repertoire is enormous, so you can find something to play, no matter your musical interests.

It’s also easy to find cheap student trumpets. Many of those inexpensive trumpets are poorly made and have intonation issues. Beginning trumpet players need an instrument that works with them and sounds great when they play it correctly. Poorly made trumpets can leave students throwing up their hands in frustration and giving up altogether.

Conn-Selmer is one of the world’s leading manufacturers of student instruments, and the Conn-Selmer Prelude TR711 Student B♭ Trumpet is a great starter instrument for any beginning trumpet player.

You can find cheaper trumpets, but the Prelude is a solid instrument that gives students a solid start on trumpet basics. Because a Conn-Selmer instrument holds its resale value better than an anonymous imported instrument, you can make back a good bit of the initial cost when you decide to upgrade.

Question: What is an American baritone?

Question: What is a saxhorn?

Answer: In 1845 Belgian instrument maker Adolphe Sax patented a line of saxhorns that used a brass mouthpiece instead of the single reed mouthpiece on his saxophones. While the original saxhorn lineup included seven saxhorns ranging from contrabass to sopranino, the only saxhorns widely used today are the baritone horn and the flugelhorn. This instrument looks like a trumpet but is a direct descendant of the soprano saxhorn.

Question: Which is easier to play, a baritone horn or a euphonium?

Answer: The baritone horn is considered one of the more accessible brass instruments for beginners, but it may require more lung power than very young students can produce. Because of its narrower tubing and smaller bell, producing the lowest notes well can be more challenging on a baritone horn than on a euphonium.

But the euphonium’s wider bore means it demands even more air than the baritone, and its looser wrap means it is a larger and bulkier instrument, making it more awkward for smaller hands.

Our verdict: it’s a tie.

Outside of brass bands, baritone horns and euphoniums don’t get the love they deserve. While euphoniums get occasional solos, baritone horns are largely left filling in harmonies. This is unfortunate, as both instruments can produce lovely music in the hands of the right player.

If you are looking for a new instrument, do your research and play as many different baritone horns and euphoniums as you can, to determine which one best suits your playing needs. Whether you choose a baritone horn, a euphonium, or something else altogether, happy playing! 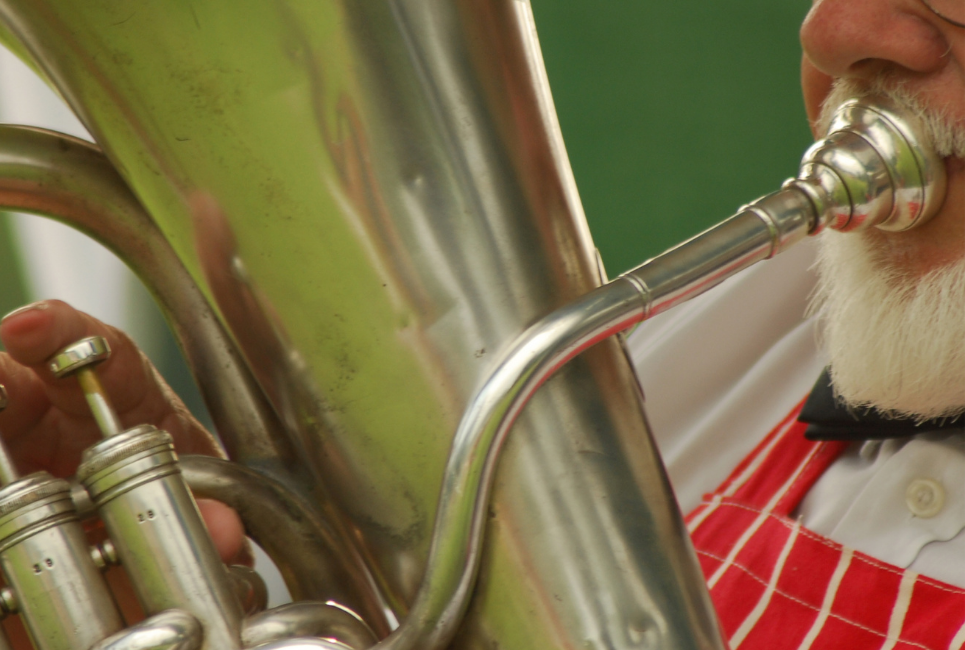 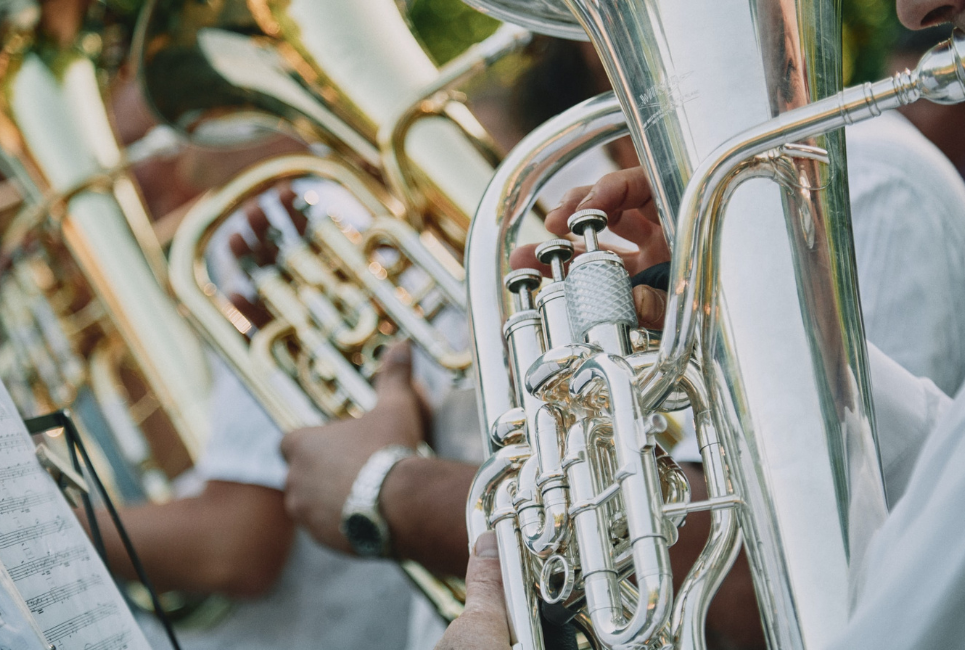