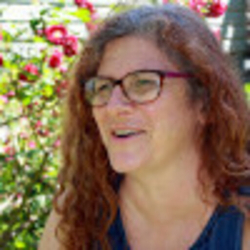 Yvette Davis
Yvette Davis started playing the clarinet at the age of 8 and played first chair during her school career. When moving to a new school, she was able to learn the bari sax performing an improv solo at her first jazz concert just two weeks later. Currently, she plays flute in a well-known local community band and runs a small woodwind repair shop with her daughter.

The first sousaphone was built by J.W. Pepper at the request of bandmaster John Philip Sousa. Sousa wanted a low brass instrument for his popular bands. He disliked the sound of the tuba. Sousa thought the standard tuba of the time was better “suited for street parade work.” In his notes Sousa said of the tuba, “but its tone was apt to shoot ahead too prominently and explosively to suit me for concert performances.” So, the influential bandmaster set about designing a low brass instrument that was better suited for his needs.

Sousa decided to point the bell straight up so the sound would be directed over the top of the band. He drew out designs and made notes. Sousa handed his notes and ideas off to his friend, instrument maker J.W. Pepper. Pepper took Sousa’s designs and ideas and created the instrument to his specifications. Pepper named the new instrument the sousaphone. According to advertisements of the time, the first sousaphone weighed 33 pounds. A few years later C.G. Conn began producing sousaphones.

John Philip Sousa loved the new low brass horn instrument that bore his name. He loved it so much, that it wasn’t long before Sousa replaced every tuba in his band with a sousaphone.

The instrument has undergone a couple of changes since its creation. For example, the first sousaphone featured a bell that pointed upwards. This design was impractical for playing outside because the bell of the instrument acted as a huge funnel. For this reason, sousaphones with upright bells have been nicknamed “rain catchers.” Modern sousaphones feature a bell that faces forward. This adaptation directs the sound over the rest of the band.

Another change made over the years is in the materials used to create the instrument. Early sousaphones were made from brass. As metal technology, and more recently fiberglass technology, improved instrument makers began using lighter metal alloys, and fiberglass to build sousaphones. Fiberglass sousaphones can be as light as 15 pounds, while metal instruments weigh as much as 45 pounds.

Today, the sousaphone is primarily a marching instrument. It’s rarely used when performing indoors. The reason for this is the efficiency with which the sound is carried. It’s easy for the sousaphone to overpower an orchestra or band. Ensembles that typically play inside use a tuba.

The musicians I’ve chosen below either have exceptional skill with tuba and sousaphone or have done some amazing and influential things with the sousaphone.

Conrad and his sousaphone were featured in newspaper and magazine advertisements for both the Sousa band and the C.G. Conn sousaphone. This YouTube video is a 1902 Victor recording of Herman Conrad playing the sousaphone in the John Philip Sousa band. The song they are playing is called Frackletanz. In the image that accompanies the video, Herman Conrad is the gentleman with the mustache who is standing in front of the bass drum. If you look closely, you can see the sousaphone he is holding. The image zooms in on Conrad as the music plays.

When Herman Conrad left the Sousa band to play for the Victor Talking Machine Company, he was replaced by John W. Richardson.

Richardson enjoyed his position as a sousaphone player for the band. Like Conrad before him, Richardson was featured in ads promoting Sousa’s band. In one ad, the 6 feet, 6 inches tall low brass player is pictured standing next to the band harp player who was only 5 feet tall. In the picture, Richardson is shown holding his sousaphone upside down over the woman, as if she would be swallowed by the instrument.

Detwiler had the honor of playing the original sousaphone in a modern concert. This unique event happened at a Montgomery County Community Band concert on May 3, 2015. As you might expect, there’s a story behind it.

It seems that in 1973 a recent college graduate named John Baily was wandering around a flea market in Adamstown, Pa with his mom and sister. While he was browsing, Baily noticed an old rain-catcher-type sousaphone in one of the vendor stalls. Baily was aware that rain catcher sousaphones were rare, and he bought the instrument for $50. He planned to refurbish the instrument. As we all know, sometimes the best of plans fall aside. The sousaphone eventually made its way to his attic. Baily kept the instrument in storage for 18 years. When he finally started cleaning it, he found there was intricate engraving on the bell. As the cleaning and polishing progressed, Baily uncovered a face in the engraving. The face was that of John Philip Sousa, himself. Baily was familiar with the rumors that Sousa’s likeness had been engraved in the very first sousaphone, and he contacted the J.W. Pepper & Sons company.

Pepper & Sons, Inc. confirmed Baily had located the first sousaphone. The instrument had been missing for decades. Pepper & Sons bought the sousaphone from Baily.

That’s where Dave Detwiler enters the story. Detwiler was a tuba player and music history researcher. He heard the original sousaphone had been found and approached Pepper about playing it. Pepper & Sons agreed and send the instrument off to Dillon Music for repair and restoration.

When the sousaphone was ready, Detwiler debuted the instrument in its first performance in over 100 years. J.W. Pepper has the history, restoration process, and clips of the concert on their YouTube channel.

Warren G. Harding is not known for being a sousaphone player, but for being the 29th President of the United States.

There are rumors that President Harding learned to play sousaphone in school, and played in his high school marching band. No information points to him playing the sousaphone, or any other instrument after high school. However, he is the only U.S. President to play with his own presidential inauguration band.

Jeanie Schroder is the sousaphone player for the Grammy Award-nominated group DeVotchKa. DeVotchka has released at least one Billboard top 10 album. Their music has been featured on the show Weeds, produced by Showtime. The band worked with music writer Mychael Danna to compose most of the music for the movie Little Miss Sunshine (2006). You can learn more about DeVotchka and Ms. Shroder on the group’s website.

Damon Bryson become the sousaphone and tuba player for The Roots in 2007.

The Roots are the house band for the popular TV show The Tonight Show with Jimmy Fallon. The group’s work has been nominated for twelve Grammy Awards and won three.

Here is a video of Tuba Gooding, Jr playing with The Roots in Boston in 2012.

Mr. Baadsvik is a tuba and sousaphone soloist and teacher. He has played with well-known orchestras throughout the world including the Oslo Philharmonic Orchestra, Taipei National Symphony Orchestra of Taiwan, and the Swedish Chamber Orchestra. He also teaches master classes for some of the most prestigious music schools in the world.

Baadsvik is the author of the popular tuba piece Fnugg. In addition to composing and playing his own work, he has debuted pieces for composers from Switzerland, the U.S, Sweden, and Norway. He’s played at Carnegie Hall and has released more than 10 albums.

You can listen to him perform on one of his TEDx talks here.

You can listen to him play a sousaphone solo in Carnival of Venice. This video was taken on June 1, 2011, in Turku Finland.

Nikita Butenko is a sousaphone player from Russia. He plays with a Russian Army band. While he has a YouTube Channel, there is little biographical information available.

This video is of his solo performance with a Russian military band in the Army and Jazz Festival.

Here he is with clarinet player Anton Alexandrov playing Micro for Sousaphone and Clarinet.

Dr. Daellenbach is one of the founding members of the Canadian Brass. With that group, he has played all over the world, including two performances for the Queen of England.

His musical style has been featured on over 100 albums, and he is one of the most recognized tuba players in the world.

In 2014 Dr. Daellenback was granted membership in the Order of Canada for his role in founding the Canadian Brass quintet and helping to popularize classical music.

If you love watching the sousaphones take the field during marching band performances you have Director Albert Austin Harding to thank for it. Harding was the first band director to use sousaphones on the field during football halftime. At the time Harding was the Director of Bands at the University of Illinois Marching Band known as the Marching Illini.

Harding and Sousa were colleagues and friends. After his death, the Sousa estate donated 39 trunks filled with music and related items to Harding for the University of Illinois.

The sousaphone is a low brass instrument that was first designed to be used in John Philip Sousa’s concert bands. Today, the sousaphone is used primarily as a marching tuba, however, there are a small number of musicians who perform concert and solo music with the instrument. These musicians use the sousaphone in a variety of genres. You’ll find sousaphones playing Beatbox, jazz, classical, marching band, and classical music.

Question: Who is the greatest sousaphone player of all time?

Answer: The greatest sousaphone player of all time was Herman Conrad. Conrad was a world-class musician on the helicon, and when he picked up the sousaphone for the first time he made history. Conrad was the first person to ever play the sousaphone. Without his dedication to teaching people about the new instrument, it wouldn’t have become a popular choice.

Answer: William G Harding, the 29th President of the United States played sousaphone. No one is certain when he learned the instrument but he played well enough to play at his presidential inauguration.

Question: Who invented the sousaphone?

Question: Which marching band was first to use a sousaphone on the football field?

Answer: The University of Illinois marching band, known as the Marching Illini put the first sousaphones on the field. Their Director of Bands, Albert Auston Harding was friends with John Philp Sousa.